Where Nevada was Born

History Of The DCHS 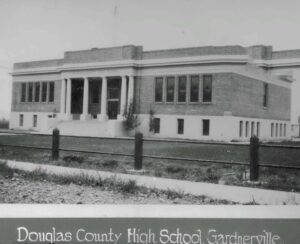 Aware of the unique history of the Carson Valley, a group of women led by Ana Dressler, Grace Dangberg, and Ana Heise decided in 1961 to form the Carson Valley Historical Society.  The purpose of the Society was to collect and preserve papers and documents of value.  Their initial project was to complete a comprehensive survey of the valley’s immigrants.  Those surveys and the archive of family papers are part of the Van Sickle Collection which is open to the public and is housed in the Carson Valley Museum & Cultural Center.

In 1971 the Nevada State Legislature deeded the courthouse in Genoa to the Carson Valley Historical Society.  After 10 years of restoration, the courthouse, built in 1865, opened as our first museum and is part of the Genoa Historic District.

The historical society changed its name in 2004 to the Douglas County Historical Society (DCHS) to better represent all of our county.

In 1988 the Historical Society took on its second building restoration.  The Douglas County high school was built in 1915 and its use as a school ended in the mid-1980s.  The Douglas County School District agreed to lease the building to the DCHS with the provision it become a history and cultural center. It opened in 1995.

DCHS is a private, non-profit corporation. The Society does not receive any funds from the State of Nevada and is not a branch of county government. Douglas County museums depend on private funds for direct support.

The Douglas County Historical Society and its two Museums are a 501-C (3) charity.